The other day we published a Log4Shell payload that, when used to exploit a server, would patch the server against future exploitation from Log4Shell. You can read through our post explaining why we built it here.

In this post, we're going to dissect what's going on with this live patch to explain how it works. If you're curious to dig into this more, you can view the code on GitHub too.

A simple Log4Shell attack follows a specific structure. We're going to break down our patch payload (above) into its composite parts:

Note: There are more advanced payloads, but they all distill down to something similar to this.

To perform the exploit, the following steps are completed in this sequence:

Here is a diagram with roughly the same information, but explained visually (with mitigation info).

Once log4j has parsed the message, the LDAP request is the first leg of the exploit that an attacker must implement in order to attain RCE.

We're going to use the CLI tool ldapsearch to allow us to emulate the request being made from within log4j to the LDAP server. With this tool, we can query the live patch server for its entries:

The most important parts of this response data are the javaCodeBase and the javaFactory fields. These tell the JNDI function where to locate the code (http://patch.log4shell.com:80/), and what remote class to resolve (Log4ShellHotpatch). In Log4j versions >= 2.15.0, javaCodeBase will only be resolved if it is localhost or a whitelisted host, meaning this payload will not execute.

For the most part, the other response values exist only to pass the LDAP schema validation step, and aren't crucial for the exploit to succeed.

For example, the javaClassName contains a value which will be logged out when running the live patch on a system. This log message will indicate that the second stage Java class file is being downloaded: http://patch.log4shell.com:80/Log4ShellHotpatch.class.

We have only added this for debugging to understand if this payload was ever actually executed, but it could be substituted with any string value.

With the information now available to tell JNDI where to load the exploit code from, the next request in the exploit chain is fired off. The response from this request contains Java bytecode which enables the actual RCE functionality of this vulnerability.

Java bytecode is easily reversible, and we are not making any attempt to obfuscate the payload. Using a tool such as jdec.app, you can simply download the payload and then reverse engineer it to understand exactly what code will be run when the exploit is triggered. 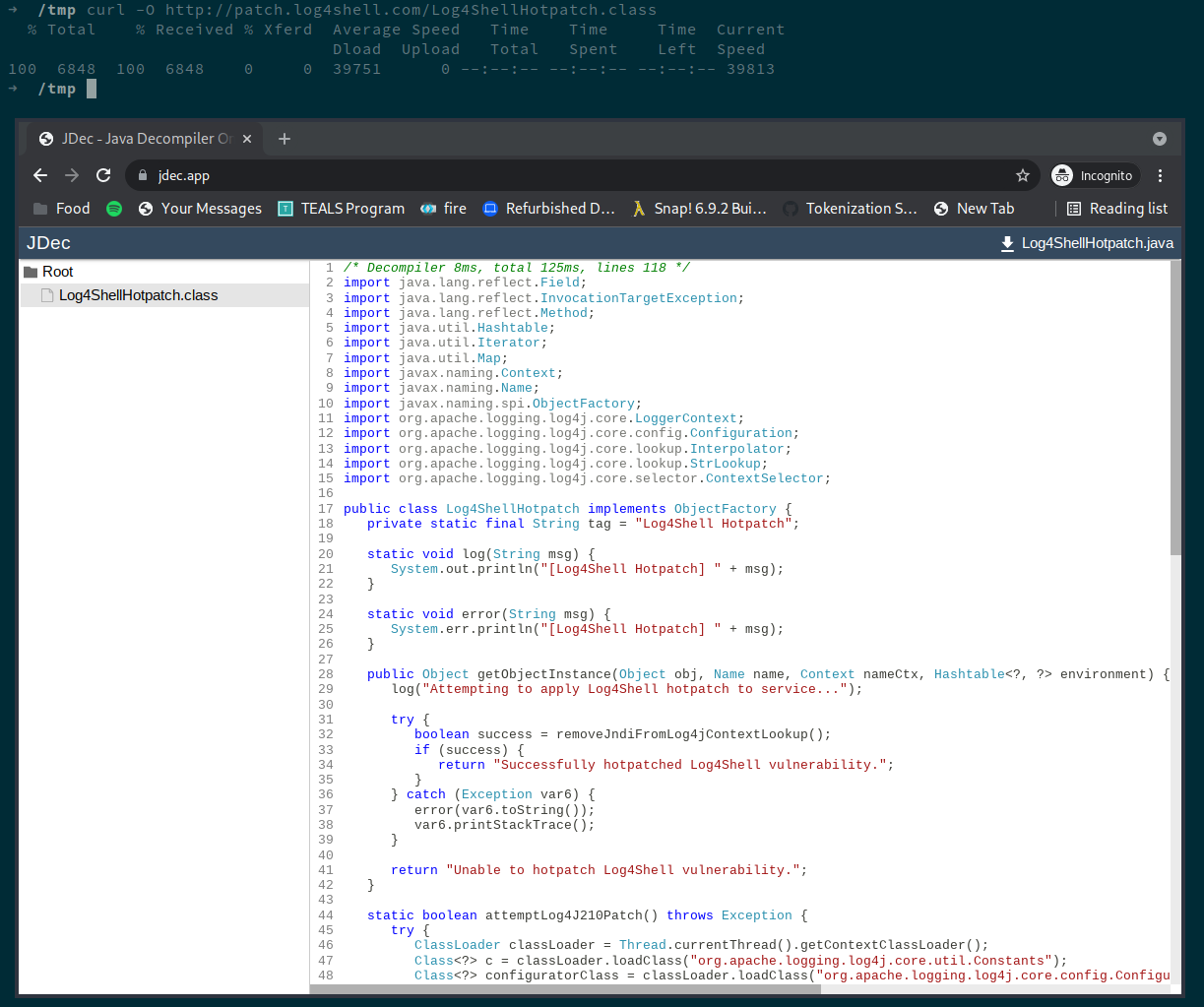 You can alternatively just browse the payload's source on ( GitHub ):

Upon loading the second stage Java class file into the program, the class Log4ShellHotpatch will start performing the in memory patch when the getObjectInstance() function is invoked during object creation by JNDI.

The patch consists of the following steps:

The last step of the patch is what prevents further resolution of jndi values during log4j logging calls.

We have published a series of posts about Log4Shell on our blog that you might be interested in:

We're also currently offering a free 30-minute consultation with one of our Security Engineers. If you're interested, please book some time with us here.

We're continuously keeping this post up-to-date as new information comes out. If you have any questions, or you're confused about our advice, please file an issue on GitHub.

If you would like to contribute, or notice any errors, this post is an Open Source Markdown file on GitHub.